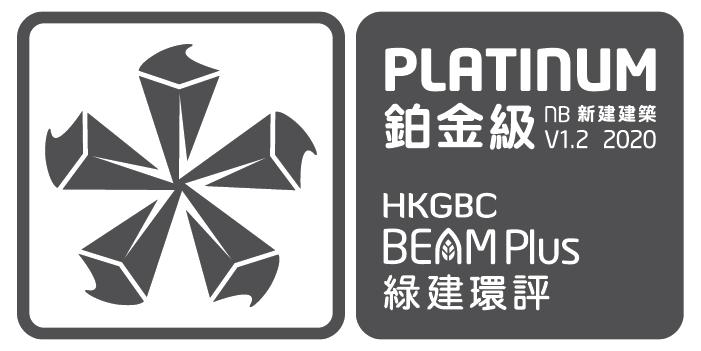 The Hong Kong-Zhuhai-Macao Bridge (HZMB) Hong Kong Port (HKP) of approximate 150 hectare in size is located on a reclaimed artificial island off the north-east of the Hong Kong International Airport.  It provides a road-base strategic link to the Greater Bay Area via the HZMB since its commissioning on 24 October 2018.

The Police Base is a 2-storey building with a 10-storey incident control tower situated at the south of HZMB HKP for operational use to provide policing and surveillance services at the vicinity of HKP and HZMB Hong Kong Section.

As part of the Government of HKSAR’s initiative to lead in driving green buildings in Hong Kong, the then Environmental, Transport and Works Bureau issued a technical circular (ETWB TC(W) No. 16/2005 requiring all works departments to adopt energy efficient features and renewable energy technologies in government project and installations wherever practicable.  Under the ETWB TC(W) No. 16/2005, all new government buildings with construction floor area of more than 10,000m2 should aim to obtain the second highest grade or above under an internationally or locally recognized building environmental assessment system.  The Police Base was enrolled in the local Hong Kong Green Building Council BEAM Plus scheme with target grading of gold which is the 2nd highest possible grading under the BEAM Plus scheme even thou the building GFA is less than threshold of 10,000m2.

The Government’s policy was a large driver in the planning stage of the Police Base and those island-wide green facilities (e.g. DSCS and reclaimed water system) which brought about significant environmental benefits for most of the HZMB HKP island users.  The use of reclaimed water for flushing water supply (in lieu of using fresh water or seawater) has benefit of reducing the quantity of the treated effluent discharged to the adjacent water body (compared to use the seawater for flushing) bringing forth benefits to the North Western Water Control Zone water quality and also brings forth large water saving (compare to using fresh water for flushing as there is no seawater source on the HZMB HKP).

Since Police Base’s commissioning, building users which are mainly government officials working and stationed at the building and the building’s neighbors would have benefited from the provisions credited under the BEAM Plus scheme as described below.  Police Base’s building users would have direct exposure and benefit from well-designed indoor air, acoustic, thermal and lighting quality.  Police Base’s neighbors would benefit from the well-designed building surrounding micro-climate of available daylight access, wind amplification compliance and adequate air ventilation.